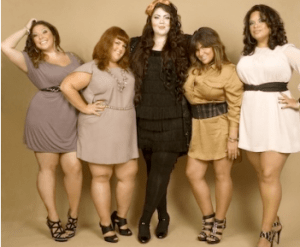 Can I just say how much I have missed you all!  Seriously, it makes me sad that my schedule has been so nuts that I have neglected you so much.  It will be nice to begin a blog without an apology.  Your faithfulness and patience to Hannah and I means the world.  My favorite thing ever is reading your comments and tweets. :0)

Ok, so those who follow my twitter you know that I recently started watching TLC’s new reality show Big Sexy.  I have to admit, I watched all 3 episodes and I could not for the life of me figure out how I felt about them.  My initial reaction was “You GO girls…flaunt those curves”….I was so moved by how brave these women are to really encourage people to be comfortable in their own skin.  I know that even after losing over 120 lbs I still have days where I’m not comfortable in my own skin.  It’s funny how before The Biggest Loser I always used to say to myself…”If I could only lose the weight I will feel on top of the world and my confidence would be through the roof!”.  Now being on the other side of that statement I now know that confidence has NOTHING to do with a number on the scale, but a state of mind.  Really to be honest confidence really boils down to a choice.  Are you going to love yourself for where you are in the journey or not?  Yes, yes I am over simplifying but you know what I mean.  Losing the weight and getting healthy has indeed helped me feel better about myself and in turn boosted my confidence, but at the end of the day I have learned to CHOOSE to love myself…good days and bad.

What has been so fascinating to me is the comments about this show…not just on twitter, but people I meet in day to day life.  Everyone seems to be watch and EVERYONE has different opinions.  Some absolutely love it and others hate it.  I find myself somewhere in the middle.  Switzerland if you will.  Now, I know most of you are just getting to know me, but anyone who knows me well knows I am NEVER Switzerland.  Ever.  I am very, VERY type A and usually things fall in black and white categories for me.  Not much gray in my world.  This on the other hand….big old gray.  I think maybe it’s because I see both sides of the issue of Size vs. Health.  I know what it feels like to be overweight and unhappy because people treat you different and let’s face it there is very little to enjoy fashion wise.  I now know what it is like to be healthy, active, and walk into any store and know that I can choose what I like.  (which is still NUTS by the way)

Another part of this is how do I justify supporting people who want to continue to stay in an unhealthy state?  It’s one thing to be overweight and working on it…it’s quite another to say that it is healthy to stay overweight and being proud of that.  I’m not sure that is the right message to be sending out there….at least not for me.  I think there is so much to learn from these issues and I would LOVE to interview any of the women who appear on that show.  I tell you I applaud their bravery and confidence to talk about such a hard issue.  I know I couldn’t do it with out falling into a puddle of tears (as you all witnessed on TBL), and these woman are doing it as they strut down a runway in a bathing suit.

I am dying to know your comments and thoughts!!  What do you think of the show??  Good/Bad….or are you Switzerland like me?  Let’s talk this out…..